What is Advanced OCV -


Advanced OCV  determines derate values as a function of logic depth and/or cell, and net location. These two variables provide further granularity to the margining methodology by determining how much a specific path in a design is impacted by the process variation.

There are two kinds of variations.
1) Random Variation
2) Systematic Variation

Random Variation-
Random variation is proportional to the logic depth of each path being analyzed.
The random component of variation occurs from lot-to-lot, wafer-to-wafer, on-die and die-to-die. Examples random variation are variations in gate-oxide thickness, implant doses, and metal or dielectric thickness.

Systematic Variation-
Systematic variation is proportional to the cell location of the path being analyzed.


The systematic component of variation is predicted from the location on the wafer or the nature of the surrounding patterns. These variations relate to proximity effects, density effects, and the relative distance of devices. Examples of systematic variation are variations in gate length or width and interconnect width.


Take the example of random variation, given the buffer chain shown in Figure 1, with nominal cell delay of 20, nominal path delay @ stage N = N * 20. In a traditional OCV approach, timing derates are applied to scale the path delay by a fixed percentage, set_timing_derate –late 1.2;set_timing_derate –early 0.8

﻿ Statistical analysis shows that the random variation is less for deeper timing paths and not all cells are simultaneously fast or slow. Using statistical HSPICE models, Monte-Carlo analysis can be performed to measure the accurate delay variation at each stage. Advanced OCV derate factors can then be computed as a function of cell depth to apply accurate, less pessimistic margins to the path.


Figure 2a shows an example of how PrimeTime Advanced OCV would determine the path depth for both launch and capture. These values index the derate table, as shown in Figure 7, to select the appropriate derate values. 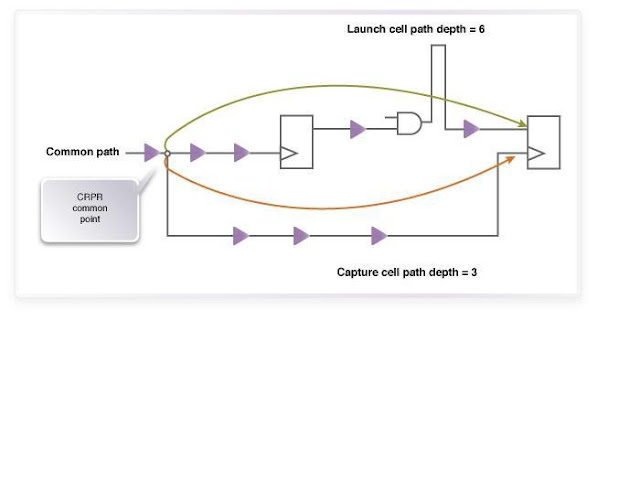 Effects of systematic variation shows that paths comprised of cells in close proximity exhibit less variation relative to one another. Using silicon data from test-chips, Advanced OCV derate factors based on relative cell-location are then applied to further improve accuracy and reduce pessimism on the path. Advanced OCV computes the length of the diagonal of the bounding box, as shown in Figure 2b, to select the appropriate derate value from the table.